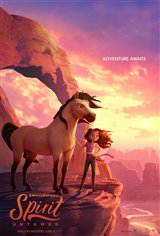 Lucky Prescott's late mother, Milagro Navarro, was a fearless horse-riding stunt performer from Miradero, a small town on the edge of the wide-open frontier. Lucky lives with her Aunt Cora in an East Coast city, but when Lucky presses her luck once too often with her risky escapades, Cora decides to move them both back with Lucky’s father, Jim, in Miradero.

Lucky is unimpressed with the sleepy little town, but that changes when she meets Spirit, a wild Mustang who shares her independent streak, and when she befriends two local horseback riders, Abigail Stone and Pru Granger.

When a heartless horse wrangler and his team plan to capture Spirit and his herd and auction them off to a life of captivity and hard labor, Lucky enlists her new friends and embarks on the adventure of a lifetime to rescue the horse who has given her freedom and a sense of purpose, and in the process Lucky discovers an unexpected connection to her mother’s legacy.