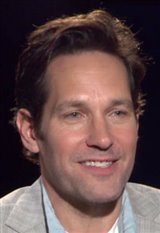 Raised in Kansas, Paul Stephen Rudd was born in New Jersey to an American father and a British mother. Always a go-getter, Rudd was Student Body President in high school. After graduation, he attended the University of Kansas, where he majored in theater. He then went on to study at the Academy of Dramatic Arts in Los Angeles and following graduation, decided to study in his mother's native land, where he participated in a three-month intensive workshop at the British Drama Academy at Oxford... See All