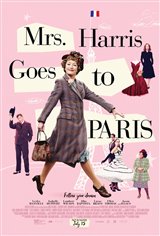 Set in 1950s London, Ada Harris (Lesley Manville), a cleaning lady for London’s upper class, dreams of some excitement in her life, and after finding an authentic Christian Dior dress in one of her client’s closets, she makes it her mission to also own one of the designer's gowns.

At first, it feels like this dress will only exist in her imagination. Mrs. Harris' clients are slow at paying her and she receives word that her husband, whom she's been waiting on for 10 years, has died at war. With this devastating news comes a widows war pension, supplying her with the funds to fly to Paris.

Things don’t go as smoothly as she’d hoped. The frigid director of Dior does not take nicely to Mrs. Harris. But she doesn't despair, and befriends Andre Fauvel (Lucas Bravo), a young accountant, and Natasha (Alba Baptista), a Dior model, who try to help turn her dream into a reality.