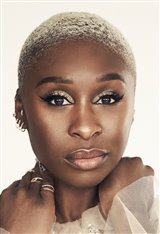 Cynthia Erivo was born in London, England as Cynthia Onyedinmanasu Chinasaokwu Erivo to Nigerian parents. She is a British actress, singer, and songwriter best known for her Hollywood film roles in Widows (2018), Bad Times at the El Royale (2018), and her starring role as Harriet Tubman in the biopic Harriet (2019). For her work in the film, she won the Hollywood Breakthrough Award for Actress of the Year at the Hollywood Film Awards in 2019. However, the acclaim didn't stop there. She also... See All