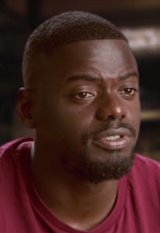 Born in London, England, Daniel Kaluuya is a writer/actor best known for his role on the British television drama Skins from 2007 to 2009. He not only starred on the series, but wrote two of the episodes. Daniel wrote his first play when he was just nine years old. The play was performed at the Hampstead Theatre, where he was a member of the Heat&Light Young Company. Daniel's big screen debut was in the film Shoot the Messenger (2006). He has also appeared on popular TV shows such as Doctor... See All