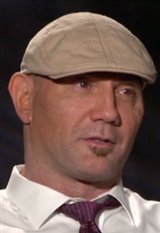 Born in Washington, D.C., David Michael Bautista Jr. was made of tough stuff. His family lived in poverty and by the time he was nine years old, three murders occurred right on his front lawn. Dave earned a bad boy and tough reputation early on, starting at 13 with auto theft. His family life did not get easier and by 17 he was on his own, supporting himself by working as a bouncer and lifeguard before he decided on a bodybuilding career. Opportunity came in the form of 2002’s WWE Smackdown!... See All