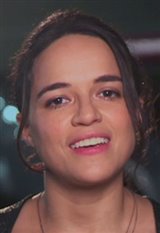 Rodriguez spent her childhood shuttled between the Dominican Republic, Texas and Puerto Rico. She landed her first role in the film Girlfight after beating out 350 other hopeful actresses who auditioned for the lead. Rodriguez endured months of intense physical training in preparation for her role as the angry and fearless Diana Guzman. It paid off—the role garnered her rave reviews from audiences and critics alike. She also won the Gotham Award for Breakthrough performance. Roles in the... See All