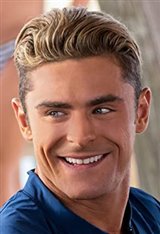 Northern California native Zac Efron began his career onstage at the age of 11, playing a singing newsboy in a professional production of the musical Gypsy. His father had encouraged him to try out, after hearing Zac sing along with the radio. That led to appearances in stage productions such as Peter Pan, Mame, Little Shop of Horrors and The Music Man. At 14, he began to break into television with guest appearances on series such as Firefly, ER, The Guardian and CSI Miami, as well as roles in... See All