Jimi: All is by My Side 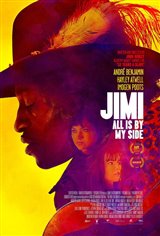 Set in 1966 to 67, the film covers a year in Jimi Hendrix’s life. Starting as an unknown backup guitarist playing New York’s Cheetah Club, the film follows him making a mark in London’s music scene up to his triumph at Monterey Pop Festival in June 1967.