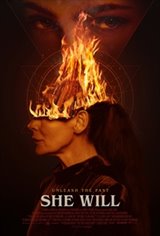 4 votes and 1 Reviews | Write a Review

She soon experiences haunting visions and dark thoughts. It is revealed that the soil of the area is rich with the remains of women burned at the stake during witch hunts.

As Veronica dreams, she relives her past traumas. When she was 13 years old, director Hathborne (Malcolm McDowell) cast her in the starring role for his film. Unfortunately, this resulted in Veronica being taken advantage of at such a young age. Hathborne's career survived and even thrived. Years later, he is remaking the same film, eying yet another young actress to fill the role that caused her so much hurt.

With each passing day, Veronica's relationship with Desi strengthens and she finds the courage to embrace her femininity and her body that has undergone so many changes. By tapping into these strange powers of the land, she will take revenge on those who have wronged her.