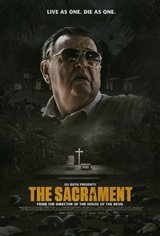 Two media correspondents document on video their friend's search to find his missing sister. They travel outside of the United States to a place called "Eden Parish," run by a mysterious religious leader known only as "Father."

He reunites with his sister, who lives in the self-sustained rural utopia, comprised of nearly 200 members. However, it soon becomes clear to the newcomers that this paradise may not be what it seems. What started as a documentary shoot soon becomes a race to escape with their lives.