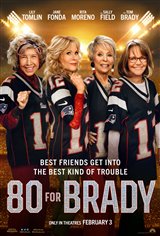 Trish (Jane Fonda) a successful romance novelist; Lou (Lily Tomlin), a cancer survivor; Maura (Rita Moreno), a widow; and Betty (Sally Field), the youngest of the group of best friends, gather together to watch the New England Patriots play football on television for every game.

When a contest for four tickets to the Super Bowl is announced, they decide to enter so they can all go away on a weekend adventure to see their hero Tom Brady play. They have a number of hilarious setbacks on their way to the Super Bowl, but nothing dampens their enthusiasm.

Inspired by a true story.